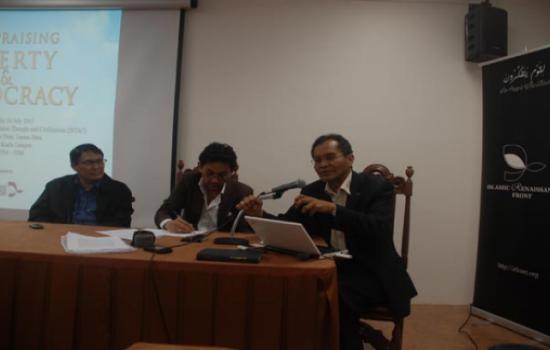 Democracy and Liberty, in the name of the Rakyat, are terms that appear to be in increasing use lately. But what they should mean and what that would look like in practice, properly, in Malaysia is something less evident. A forum hosted by the Islamic Renaissance Front on July 24th at ISTAC aimed to explore the subject matter in more depth and for this they were joined by Dr. Farish Noor and Dr. Dzulkefly Ahmad, with Dr. Ahmad Farouk Musa as moderator for the diverse audience of over 70 others.

It perhaps shouldn't surprise us that the forum eventually veered towards discussions on Islamic Democracy, with questions and comments from Dr. Farish Noor and the audience gradually putting Ahmad on the defensive. But to his credit clarifications were made, misconceptions were addressed and inaccuracies corrected. Dr. Dzulkefly Ahmad assured us, again and again, in rather moving appeals, that PAS is not anything like the Taliban, that their record of consistent openness to multiculturalism and religious tolerance has been overshadowed by lazy prejudice and gross simplifications of their intentions. What PAS really has in mind at the end of the day is a kind of minimalist state, and while this will be guided by their steadfast commitment to Islamic principles, their virtues should not be evaluated through the lens of general fears towards moral policing, or religious chauvinism. There is much more that PAS can offer.

According to Dr. Dzulkefly Ahmad, the dreams for some deep reaching Islamic State ala Iran is something many in PAS have relinquished, if not at least, seriously rethinking. Many in PAS are now also keen readers and students of the likes of Rachid Ganouchi and Tariq Ramadhan, and not just of Mawdudi and Khomeini. If we look closely and fairly we will find that the ideal PAS state is first and foremost a caring state, with an acute sensitivity towards the protection of life, lineage and property. Anyway, PAS' primary concern now is with the state of the country's economy and the inequalities therein. More importantly, the reality remains that PAS can only participate in power through a coalition, given that it is only contesting 62 seats. Their ambitions, however lofty they fear to the unfamiliar, can only be possible through consensus and cooperation with others. Given the reality of Malaysia then, PAS can only be democratic. There is simply no way that they can pursue politics while ignoring the necessity of some form of liberal pluralism.

Dr. Farish Noor played a crucial role in adding further context and depth into the discussions, all at once reminding the audience of PAS' virtues as a grassroots party with a sincere fighting spirit, while at the same time highlighting the limits of PAS' claims. He emphasized at the end of the day, that despite their purported faults, PAS has demonstrated admirable political dynamism, grappling and evolving with the main political and intellectual currents of each era it has ever found itself in political struggle. But at the same time, there appears to be a lack of clarity in what PAS envision Malaysian society to be, exactly.

In this, there is an evident tension in Dr. Dzulkefly Ahmad's explanation that is worth noting: for example, while he wanted us to appreciate the Islamic roots of contemporary liberal democracy he also insisted on how the notion of a liberal democracy we have come to confront is still nonetheless deeply anchored to the particular contexts that gave birth to the modern European notion of Enlightenment (the emergence of the Nation-State, the end of Feudalism and so forth). So while we are to acknowledge that John Locke, typically credited as the progenitor of liberalism, was intellectually inspired by Ibn Tufayl and Ibn Khaldun, we are at the same time to note that Locke's liberalism is nonetheless insufficient to address the particular concerns of our Malaysian context.

This is of course true. Malaysia is facing problems that the early thinkers of liberalism and democracy could not have possibly foreseen. The ambitions of PAS should be very much understood in this light, as an attempt to formulate a vision of democracy given Malaysia's Muslim realities. But what this line of thought, even in its best version, appears to miss is that non-Muslim / liberal apprehensions towards PAS have more to do with its fundamentally sectarian character. The worry is not so much that PAS are Muslims, but that PAS has religious identity politics at the heart of its vision. At worst, there will be misconceptions, but at best it is an opportunity to dialogue openly, and dialogue is at the end of the day, the most basic element of the democratic process.

As the discussion continued, Farish Noor gave an important reminder that we should keep in mind as our reflections on the subject continues: The pulse of any flourishing democracy lies in the actual material conditions of its people's lives: in the sufficiency of shelter, security and livelihood, before and after everything else. Our preferences of leisure and personal indulgences, while valuable, barely scratches the surface of what is truly at stake in politics. As a small third world country deeply dependent on foreign trade, and caught between the interests of a rising China and an economically troubled America, the odds of Malaysia's economic survival in the near future is already deeply tied to geopolitical circumstances much larger than what it can control.  Dr. Farish Noor insistently, and rightly, emphasized that we need a more robust and dynamic notion of a state as an ideal to guide our search for alternatives, but the liberal apprehensions that were voiced to Ahmad reveals a deeper and more prior necessity for a trusting community, whereby all doubts and misunderstandings will be confronted in transparency, and in the best spirit of solidarity. We need a Rakyat that knows itself first. A state will only be as a good, or bad, as "the people" will allow it to be.